Experiencing the city on foot is at the heart of many investigations and appreciations of the city: Walter Benjamin described flânerie, a detective-like exploration of the urban, as the archetypical experience of the modern city; Guy Debord and other members of the Situationist International encouraged pedestrians to playfully ‘drift’ through the city to reimagine their functions; and Jane Jacobs showed that we can learn something about cities from street-level experiences.

Like any observant neighbour, so it goes, urbanists can study metropolitan society from the perspective of the sidewalk. Urban ethnographers have recognized the heuristic value of walking through the city. However, they most often try to see the city through the eyes of their inhabitants. As Venkatesh (2015) noted recently, urban ethnographers often promise to bring the reader into the less visible or closed-off social worlds of their research subjects. Exploring the city alongside locals can be a suitable technique for bringing these spaces closer to one’s audience – walking is an everyday practice through which urban space is constantly made (DeCerteau 1984).

In recent years, walking has in fact become a formalized ethnographic method. Degen and Rose (2012: 3281), for example, contend that so-called ‘walk-alongs’ can “produce richly evocative sensory impressions.” When applied in ethnographic research, “a walk-along plays out more as a dialogue than an inquiry” as Holgersson (2016:223) added. The ethnographer and the research participant can engage in a dialogue that reveals diverse contextual knowledge of spaces and their functions. In fact, the turn to everyday mobility in urban sociology and anthropology has produced many insights regarding the accessibility of urban spaces depending on the social and ethnic backgrounds of their users.

Following participants along their routes through and forays into the city allows the ethnographer to experience the material and imaginary boundaries of the city first hand. Yet, walk-alongs do not pertain to all urban research. In Indonesia, for example, walking is generally avoided by most urbanites. And in fact, the spatial layout of North American cities still prioritizes motorized traffic. In response to such critique, the concept of “go-alongs” emerged, which incorporates multiple forms of movement through the city.

As one of the Urban Research Groups at the Georg-Simmel Center for Metropolitan Studies the Urban Ethnography Lab is a growing centre that promotes ethnographic research methods in the interdisciplinary section of urban studies. 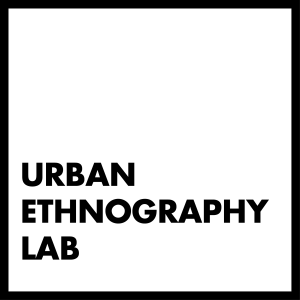