A Visit to Berlin

Our activities in Berlin were dedicated to establishing an official link between the University of Toronto Ethnography Lab (EL) and the Georg Simmel Centre for Metropolitan Studies (GSZ), while engaging in preliminary exploratory research to gauge possible future sites for international research collaborations. The UofT students were introduced to a number of researchers from Humboldt University’s Department for Social and Cultural Geography. The purpose of this was to encourage dialogue about possible avenues for improving urban ethnographic research methods in both anthropology and geography.

Our plan was to visit a number of potential field sites that might later serve as the foundation for future collaborative research projects and experimentation with ethnographic research methods.

We started with a tour of Teufelsberg, a site located on a hill constructed from the rubble left in Berlin following WWII. A U.S. listening station was built on the hill during the cold war, and more recently an artist collective has reclaimed the territory with a series of alternative art installations built into the station’s ruins. Visiting this location was useful for understanding the history of land ownership and transformation for resistance practices since WWII.

We then took a tour of the inner city neighbourhood of Kreuzberg, a Berlin borough located south of Mitte known for its dense immigrant population and counterculture scene. 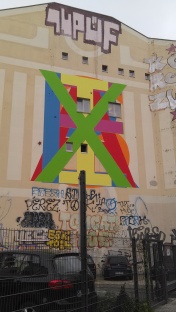 The site inspired us to consider a possible comparative research project with Toronto’s Kensington Market, a well-known immigrant hub with its own alternative culture atmosphere. Students and collaborators at the University of Toronto Ethnography Lab are already undertaking a long-term research project there.

These research excursions were followed by meetings and workshops with GSZ members and other potential collaborators, with whom we produced a proposal for the inception of our new Urban Ethnoraphy Lab. The week culminated in obtaining approval from Dr. Ilse Helbrecht, Director of GSZ to establish our new Urban Ethnography Lab under the umbrella of the GSZ.

Click here for more information about our team’s exchange trip in Toronto.

Carolin Genz is currently Research Fellow and Lecturer at the Department for Cultural and Social Geography at the Humboldt-University and Research Associate in the Collaborative Research Centre 1265 "Re-Figuration of Spaces" in the project area "Knowledge of Space" at Technische Universtität Berlin. As an urban anthropologist in the intersecting fields of social anthropology, human geography, and urban studies, she constantly develops ethnographic methods to capture the socio-spatial constitution of urban practices. Her research focuses on spatial practices of resistance, housing, and gender.

One thought on “A Visit to Berlin”

As one of the Urban Research Groups at the Georg-Simmel Center for Metropolitan Studies the Urban Ethnography Lab is a growing centre that promotes ethnographic research methods in the interdisciplinary section of urban studies.